Tam Coc Scenery Complex in Hoa Lu district, the northern province of Ninh Binh, is one of the most beautiful cave complexes in Vietnam. 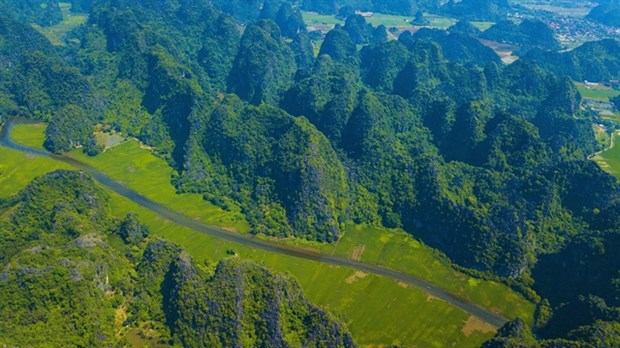 An aerial view of rice fields around the Ngo Dong River. (Photo: VNA)

Tam Coc Scenery Complex in Hoa Lu district, the northern province of Ninh Binh, is one of the most beautiful cave complexes in Vietnam.

In this time of transition between spring and summer, Tam Coc is bathed in an immense green colour of rice fields along the banks of the Ngo Dong River, creating a romantic and magnificent scene.

Visiting the site, tourists will lose themselves in the beauty of mountains, caves and rural villages, and perhaps even find some peace for their souls in the splendour of nature.

From a high view on a mountain, the scenery looks more like a stunning painting than reality.

The only way to get deep inside Tam Coc Complex is by boat while as the road ends after reaching the first cave.

Tam Coc, inside the famed Trang An Landscape Complex, a UNESCO-recognised heritage site, with karst mountains and water rice fields, has been nicknamed an inland Ha Long Bay.

“Tam Coc”, which means “three caves” in Vietnamese, includes the caves Ca, Hai and Ba, which were created by the river current running through karst mountains.

Ca Cave measures 127m in length with an entrance up to 20m in width. It is cool and humid inside the cave, which has a lot of stalagmites.

The river cruise will take about two hours. Rice fields run from the end of the first cave to the second. At the end of May and early June, when the rice matures, the scenery is more brilliant with the yellow rice emerging from the green background of mountain, river and plants.

Ninh Bình province is more than 90km south of capital Hanoi. This year, the province is hosting the National Tourism Year. Various tourism promotion activities have been planned to lure both domestic and foreign tourists.